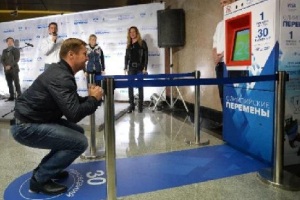 No change for a subway ticket? No problem. That is, if you’re in the city of Moscow, where riders can pay for their tickets with squats.

As part of its campaign to promote the upcoming Winter Olympic Games, which opens in February 2014, and promote a healthier lifestyle, city officials are offering free subway rides in exchange for 30 squats. A single ride costs 30 rubles, thus the 30 squats.

To get their free tickets, passengers have two minutes to do the squats in front of a vending machine designed to count the squats. The special machine bears the Olympics logo and is placed next to the standard electronic vending machines at the subway station.

According to a post on the Wall Street Journal, the president of the Russian Olympic Committee, Alexander Zhukov, was quoted as saying that they ‘wanted to show that the Olympic Games is not just an international competition that people watch on TV, but that it is also about getting everyone involved in a sporting lifestyle.’

The free rides will be offered for a month.