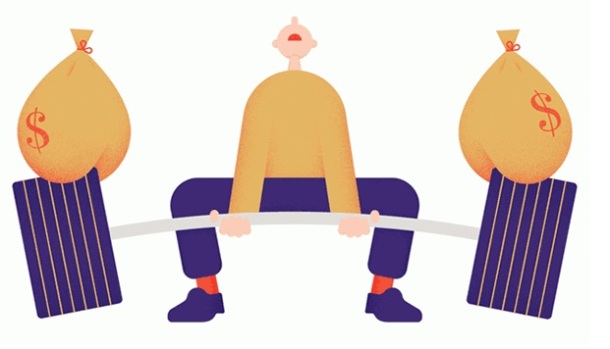 Story provided by The Upshot –

Our overoptimism about how much we will work out has been the subject of academic research. Nearly a decade ago, the economists Stefano DellaVigna and Ulrike Malmendier published “Paying Not to Go to the Gym,” a paper in which they found that members at three Boston gyms went an average of 4.3 times a month. With monthly membership fees of just over $70, that meant an average of $17 per visit — well above the $10 charge to work out as a nonmember.

So why didn’t they just pay per visit? Because they overestimated how often they would go. The authors surveyed gym members who, on average, said they would work out about 9.5 times a month, more than twice the actual attendance observed in the study. People remained in denial about their gym attendance even after they’d stopped going entirely: On average, nonattending gym members did not cancel until 2.3 months after their last visit, paying for $187 worth of completely unused gym access.

Since pay-now, work out-later isn’t working as a strategy, economists have been searching for other solutions to get people into the gym more often.

“We describe a field experiment measuring the impact of bundling instantly gratifying but guilt-inducing ‘want’ experiences (enjoying page-turner audiobooks) with valuable ‘should’ behaviors providing delayed rewards (exercising),” wrote the economists Katherine Milkman, Julia Minson and Kevin Volpp of Wharton in a 2013 research paper. They gave Penn undergraduates free iPods loaded with audiobooks of their choice, but told them they could listen to them only at the gym.

This worked for a while: The undergrads given the iPods went to the gym about 50 percent more often than others who were just given a Barnes & Noble gift card to spend as they pleased. (A third group, given a book iPod to take home but encouraged to listen only at the gym, placed in between the other two.) But that lasted for about seven weeks. Thanksgiving break came, and the students returned to school having fallen out of love with their audiobooks; they no longer worked out more than their peers in the control group.

“It was a bummer from the perspective that we’d like to design interventions that work forever,” said Ms. Milkman. But she also noted that there are lots of opportunities to try again. Gym visits don’t just pick up at New Year’s but at the start of each week, each semester, after holidays, and even after birthdays (though not 21st birthdays). The key is getting one of the fresh starts to stick.

Heather Royer, an economist at the University of California, Santa Barbara, thinks she has hit on a way. In partnership with a Fortune 500 company, she and her research partners ran an experiment that combined two interventions: One to get people to start going to the gym, and another to keep them there. For four weeks, the company paid its employees to work out, $10 per visit up to three times a week. After those four weeks, there were no more payments, but some workers were offered a “commitment contract”: They could set aside their own money that would be released to them only if they worked out over the next two months; otherwise, it would be given away to charity.

Even though those commitment contracts ended three months after the start of the study, the effects on workout frequency persisted for years: Three years after the study, the workers who had been offered the contracts remained 20 percent more likely to work out than those who had not been offered any incentives. By inducing a habit with cash payments, and then reinforcing that habit with self-funded payments, the researchers were able to permanently change workout habits for at least some people.

“They have a little bit of a conflict of interest,” says Richard Thaler, a behavioral economist at the University of Chicago. The fact that lots of people join gyms and rarely go to them isn’t great for our national waistline, but it’s pretty good for people who own gyms. “If they succeeded in getting people to go to the gym three times a week instead of three times a month, they wouldn’t be able to have as many members.”

The more promising avenue may be employers. Ms. Royer hopes to later demonstrate not just that commitment contracts work to get employees to the gym, but also that they save employers enough through improved health to be worth paying for.

For now, you can use a service like Stickk to set up your own commitment contract: Promise to go to the gym, and set aside money that will be given to charity if you don’t. For extra incentive, you can even use an anti-charity: If you don’t work out, your money will be given to a cause you hate. That’s more likely to keep you working out through beach season than simply paying up front for a gym membership.