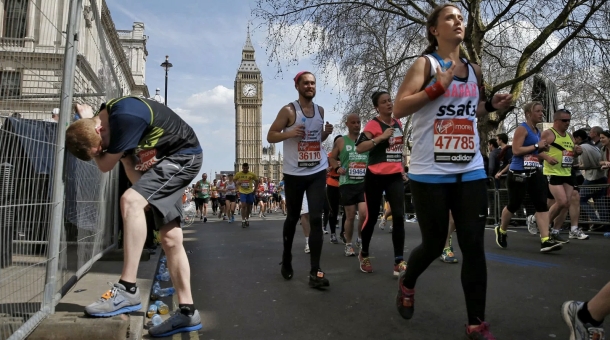 Last Saturday, I woke up with a sore throat. I had recently had a head cold, though, so I figured it was nothing to worry about. I popped some ibuprofen and completed a 14-mile training run as planned.

By 6:30 that night, I had spiked a high fever and my throat felt like I had swallowed embers. The next day, my doctor told me I had developed a nasty case of strep throat.
Should I have avoided exercising, even though I didn’t feel that bad?

Exercising when you’re well increases your blood flow and circulates more immune cells throughout your body, where they can be on the lookout for potential pathogens. Exercise also reduces stress, which can impede your body’s ability to fight off disease.

But when you’re sick, working out has diminishing returns. David Nieman, an exercise physiologist at Appalachian State University, developed the J-curve (paywall) almost 20 years ago to describe the immune system’s relationship to exercise. The model suggests that when you’re well or have a minor upper-respiratory infection—like a head cold or sore throat—moderate amounts of exercise won’t hurt you, and may even help your immune cells reach all the areas they need to in your body (think the downward curve of the “J”). But, if you overtrain or exercise too intently while you’re sick, you’re likely to only prolong your symptoms, or make yourself susceptible to picking up something worse (think the upper-increase tail of the “J”).

Nieman has a simple test to tell if you should skip your workout, called the ‘neck rule’: “If the symptoms are from the neck up—if you have a runny nose, sore throat, just a regular cold—the data appear to indicate that if you do something like a brisk walk or easy exercise, it won’t hurt,” he told Quartz. Though Neiman says exercise shouldn’t be treated like a remedy, you likely won’t make yourself worse.
But “when the symptoms are throughout the body—fever, general aches and pains,” Nieman’s research has found that it’s better to not exercise at all, otherwise, “you’re just risking a more severe illness.” And if you’re not sure if you have a cold versus the flu, he advises it’s better to be conservative and rest.

Nieman says that when you do physically push yourself—especially while sick—you suppress your defenses. “Stress hormones [from physical exertion] down-regulate the function of some of the immune cells, and that results in the open window where viruses can multiply at a higher rate than normal.”

Even if you do decide that you’re well enough to exercise while under the weather, lingering symptoms could be a sign that you’re overdoing it. “A typical cold should resolve in one to two weeks max,” Arianne Missimer, a Pennsylvania-based physical therapist and former personal trainer, tells Quartz. If it doesn’t, “it could mean that you’re possibly overtraining.” And if you’re not recovering, or feel like your symptoms are worsening, you should always seek medical help.

Missimer says your best guide is “listening to your body.” Missmer was diagnosed with stage-3 liposarcoma, a rare form of cancer, last year. She had exercised her entire life, and continued to do so during treatment. “If there was a day where I felt really exhausted and I felt I just couldn’t do it, I wouldn’t do it that day or would do something very light,” she says. “But then on a day where I felt pretty good, then I might push it a little more.”

If you are an exercise-junkie, take comfort in the fact that a little rest now can save you time off your feet in the future. If you wake up feeling stuffy, do something lighter, like yoga, going for a walk, or running three miles instead of six, Missimer suggests. Whatever you do should be moderate enough to let your body fight off any lingering infection, so you can get those harder workouts in later.