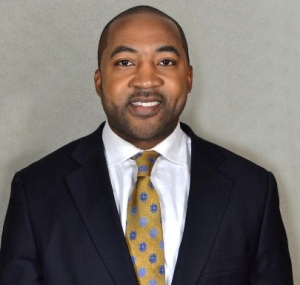 Having been a fixture in the community for close to 30 years, Rice and Rice Attorneys at Law, founded by Jared’s parents, Gail and J. Roger Rice, was a natural career choice. He joined the firm and his efforts with the firm have helped thousands of people with everyday legal issues.

Jared was gracious enough to talk about balancing his practice with being an elected official, the state of African-American political leadership and environmental issues in New Rochelle.

Besides representing New Rochelle, you represent the Rice family. With your mom and dad owning a law firm and your younger brother being a lawyer as well, that has to be an additional level of pressure. Talk about living up to your family’s legacy.

I am very proud of the accomplishments of my family, particularly my parents as they’ve built a solid foundation for my brother and me. This is the 30th anniversary of our law firm, Rice and Rice Attorneys at Law. There has never been any pressure to live up to a legacy because I was well prepared for my current responsibilities at a young age.

What’s an average day for you? Give us a summary of how your day is laid out.

My day starts at 6:30 a.m. where I wake up to get in an hour of reading until my two young children wake up.  After getting my daughter ready for school and tending to my son, I begin my work day either at Court or in a City Council related meeting. Throughout the day, and sometimes in to the evening, I balance my law practice responsibilities with my City Council duties. When I finally get home, its family time until I get some more reading in and then I get ready to start my day all over again.

Following the civil rights movement, we saw the emergence of Andrew Young, John Lewis, Bobby Rush and others as elected officials. What type of impact do you predict that the Obama administration will have on new elected officials emerging from the African-American community?

African-American elected officials have not always been associated with fighting for environmental and sustainability issues. In New Rochelle, you pushed for the passage of GreeNR. Talk about the impact that it’s had.

Almost two years ago, I voted for the resolution supporting the GreeNR sustainability plan which is intended to address the environmental, economic and social benefits of leading a more sustainable lifestyle. In the era of climate change and resource scarcity, it is imperative to take the environment more seriously. In New Rochelle we want to be part of the solution, hence we designed and created several local initiatives that will make a small difference on overall global carbon emission levels but a larger difference in creating trends that address saving our environment.

The new age elected official has been forced into using social media. Is this a tool that you use for responding to constituents? What is your strategy or approach when using Twitter and Facebook?

Being that I am relatively young, I am very comfortable with social media outlets. I am pretty seasoned with Facebook and am just getting used to twitter. I think that the most important things for an elected official when using such outlets are for him or her to be informative and personable.

Speaking of social media, you were at the center of a controversial tweet that may have been misunderstood. During the Republican National Convention, you made mention of a #NegroSpotting hashtag being used to highlight the lack of diversity in the RNC’s crowd. What did you learn from that ordeal?

I got my first taste of national twitter backlash this past summer during the Republican National Convention all for reusing a hashtag #negrospotting, which was trending at the moment. It was based on the fact that people were actually surprised by the lack of visible African American faces at the convention. What was innocent to me at the time, turned out to be picked up by Fox News correspondent Michelle Malkin where she wrote an article about me; this led to an onslaught of criticism from many of her right wing twitter followers. I learned that day that I am truly a public figure and that my words do make a difference.

I had a conversation with a friend recently about partisan politics. We came to the conclusion that a lot of our friends have very conservative views, yet our circle of friends lean toward voting liberal on most issues. With a new generation of voters with new mindsets coming along, do you believe that partisan politics will look the same 20 years from now?

Political parties and platforms are consistently in flux and will continue to shift in the near future. 20 years from now, who knows what demographical groups will be Democrats and who will be Republicans. I think that there will be continue to be an increasing group of people who consider themselves to be true independents where the candidates will matter more than the party.

Any words of wisdom that you live by?

Whatever you do in life, go hard at it because you’ll never know when an opportunity will arise for you to live out your dreams.